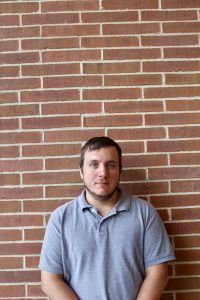 Christopher Fleming is in the first year of his M.A. program in German Studies. He graduated with a B.A. in Arabic and German (dual major) from MSU in 2014 and has just recently rejoined the academic world. He is a passionate language learner and former teacher with several years of experience teaching English as a Second Language (ESL) in his native Metro Detroit. His primary focus as a master’s student is enhancing his teaching skills, continuing to improve his language abilities, and finding new and innovative ways to accelerate students’ acquisition of target languages inside and outside of the classroom. Chris(topher) is currently serving as a graduate coordinator at the Writing Center @ MSU, where he helps students seeking to enhance their writing capabilities. 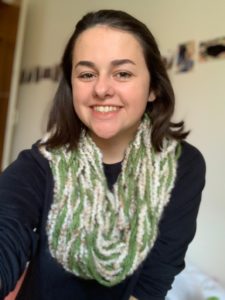 Olivia is in her first year of the German MA program at Michigan State University. She completed a BA in German at Albion College in 2021, with a semester in Heidelberg, Germany. Olivia’s academic interests include language teaching pedagogy, creative writing, and second language acquisition. She currently works as a Graduate Teaching Assistant teaching first-year German students. 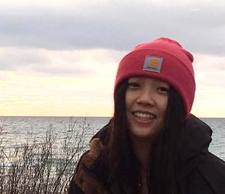 Tianyi (Titi) Kou is in her third year of the PhD program at MSU. She completed a BA and MA in German Studies in China, with a year of study at Universität Erfurt. Her research focuses primarily on the ways in which the sociological phenomenon of football influences national and regional identities in Germany. Before she joined the program, she worked as a translator for two publishing houses and also as a part-time interpreter for multiple international football clubs during their summer trips in Beijing, China. Since her arrival at MSU, she has begun to explore the possibilities of Digital Humanities methods for her research. In the past two summers, she has been to multiple DH summer schools and workshops and conferences in Canada, Germany, and Netherlands. Titi is a currently a Cultural Heritage Informatics Fellow, where she is applying DH methods to her own research project: Multiculturalism in the German Football World. In November she will present her work at The Digitalization of Research Conference at Universität Leipzig, Germany.

Jared started the Ph.D. program in the Fall of 2021. He currently has a Max Kade fellowship shadowing a German literature and culture course with professor Mittman. His current academic interests center around the people and products of the former German Democratic Republic. Additionally, Jared is studying digital humanities and their application in the classroom and for research. He is also exploring museum studies.

After his BA at Central Michigan University, Jared taught German and robotics to high school students for over eight years. During that time, he obtained his master’s degree in German studies at Middlebury College. Before coming to MSU he also worked as a language engineer, refining language data for German natural language processing models, and as a training consultant for a microchip manufacturer. 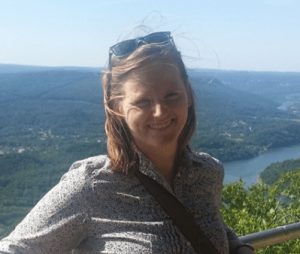 Mary Ellen Rutemeyer is a PhD student in German Studies. She received her BA in History from East Tennessee State University and her MA in Germanic Languages and Literatures from Ohio State University. After receiving her MA, she taught German for 3 years in Madison, Wisconsin. She has taught German at the university level and to adults at a non-profit Saturday school. At MSU, her research, coursework, and projects focus on language teaching and learning.  She will spend her first year in the program (AY2020-2021) as a Max Kade Fellow, working with Dr. Senta Goertler on curriculum design projects for 100- and 200-level German courses. 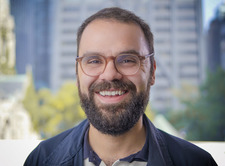 Following his completion of the MA at Michigan State with a thesis entitled: “From Ghetto to Goethe: German Rappers of Color Claiming Their Space in the Nation,” Krsna Santos has transitioned into a focus on curatorial work in museums. Being of multinational background himself, both Brazilian and American, he is interested in transnational identity and immigrant communities in the German-speaking world. He has earned a Museum Studies graduate certificate and interned at MSU’s Eli & Edythe Broad Museum while working on a PhD in German. He is currently interested in pursuing a career in museum work. 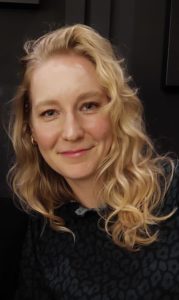 Helena Stech is a PhD student in German Studies. She did her Bachelor’s degree in Education Science at Humboldt University of Berlin, where she was granted a scholarship to study and teach German at Franklin & Marshall College in Lancaster, PA. After her return to Germany, Helena started teaching German as a foreign language to adult learners at language schools and companies in Berlin for five years. At MSU, Helena’s work is focusing on foreign language teaching and learning, and the connection between culture and language.

Melissa Elliot (2020) is an Assistant Professor of German and German Studies at Wheaton College. While writing her dissertation, Melissa taught German language and culture at Calvin College in Grand Rapids, MI. Her dissertation – “Forgotten Notes: Narrative Film Music in East German Cinema” – focused on the role of music in DEFA cinema as a means of expression in East Germany. She is more broadly interested in how music functions in film adaptations of novels to comment upon and further interpret the source text, which she addresses in her article, “No Need for Words: The Role of Music in Volker Schlöndorff’s Der junge Törleß” in Literature/Film Quarterly.

Carly Lesoski (2019) worked as a Subject Matter Expert in German at Michigan Virtual and is currently an E-Learning Specialist in the Office for Teaching & Learning at Wayne State University. (Diss: Identity and Capital During Telecollaborative Exchanges in the German Language Classroom)

Anne von Petersdorff (2018) completed her degree with a focus on film and Digital Humanities. Her hybrid dissertation project integrates a written dissertation – “Unexpected Journeys: At the Crossroads of Collaborative Filmmaking and Feminist Scholarship” – with Wanderlust: cuerpos en tránsito, a feature-length, collaborative documentary film with theoretical and historical treatment of German feminist filmmaking. She is currently traveling with the film to various borderlands and entering into new discussions about human mobility and the use of technology, and establishing a home base for her next creative and scholarly projects in Europe.

Susan Hojnacki (2018) teaches German, Language Acquisition/Teaching, and Educational Technology at Aquinas College. Her research interests revolve around the role of technology in second language acquisition, the effect of oral output on learner proficiency in second language learning, the influence of linguistic tendencies on online speech in German, and curriculum development in modern language programs. Her dissertation, “The Flipped Classroom in Introductory Foreign Language Learning,” was based on data collected in her own teaching practice.

Stephen Naumann (2012) is Assistant Professor at Hillsdale College (Diss.: “In Sight but out of Mind: The Construction of Memory at Three Once Stigmatized Sites in Berlin and Poznan”)

Theresa Schenker (2012) is Senior Lector and Language Program Director of German at Yale University. She is also currently co-editor of Die Unterrichtspraxis, the leading journal of German language and culture pedagogy in the US. (Diss.: “The Effects of a Virtual Exchange on Language Skills and Intercultural Competence”)

Angelika Kraemer (2008) is Director of the Language Resource Center at Cornell University. She is also currently co-editor of Die Unterrichtspraxis, the leading journal of German language and culture pedagogy in the US. (Diss: “Engaging the Foreign Language Learner: Using Hybrid Instruction to Bridge the Language-Literature Gap”)

Several of our recent MA students, including Dan Nemeth (2021), Abigail Schmid (2021), Leonie Hintze (2020), Amelia Stieren (2020), Christian Olias (2019), Kathryn Roche (2015), Adam Orange (2014), Scott Casey (2013), and Emily Thomas (2012), are teaching in a variety of school settings in Germany and in the US; others are pursuing advanced degrees at other institutions: Kate Schaller (2015) is currently pursuing a PhD in German Studies at Vanderbilt University; Matt Sherman (2011) is matriculated in the German PhD program at the University of Texas, Austin; Chad Bousley (2016) has completed an MA in TESOL at Michigan State and is currently teaching in the Czech Republic; Dan Walter (2011) completed a PhD in Second Language Acquisition at Carnegie Mellon University and is currently teaching at Emory University’s Oxford College.

Yet others are employed in non-teaching positions in institutions of higher ed: Kelsey Fedewa (2014) is International Student Coordinator in the Office of International Programs at Kettering University; Kathryn Klimczak (2013) is Administrative Coordinator at Fraunhofer USA at Michigan State University. Kylia Kelley (2011) works as a translator for the auto industry in the Greater Detroit area. Following a stint as manager of Moosejaw Mountaineering in Boulder, CO, where she enjoyed serving many German tourist clients, Hanna O’Neill (2013) currently works as a buyer for Moosejaw at the corporate level in Madison Heights, MI. 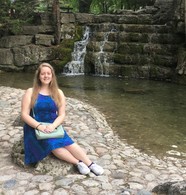 Abigail Schmid is a second-year student in the MA program. During her first year, Abigail worked as a Teaching Assistant for the 101-102 German courses and enjoyed standing in front of the classroom for the first time. Abigail graduated from MSU in 2019 with BAs in Arts & Humanities and German, and a minor in Fiction Filmmaking. Throughout her undergraduate studies, Abigail enjoyed several study abroad opportunities including a semester at the Friedrich Schiller Universität in Jena, and a summer in London and Edinburgh with the MSU film program. She enjoys the creative freedom offered by the German program and looks for new opportunities to integrate her other artistic passions. She loves the communicative powers that the arts have and enjoys sharing them with others. Abigail is currently a Research Assistant with the Undergraduate German Program. 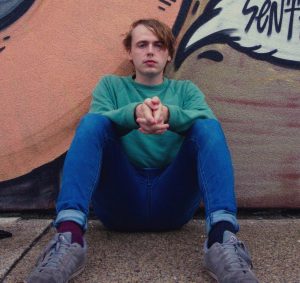 Dan Nemeth is a second-year student in the MA program. He graduated from MSU in May 2019 with a BA in Political Science and German with a minor in Global Studies in Social Sciences. During his undergraduate studies, Dan had the opportunity to spend his junior year abroad in Freiburg, Germany and complete an internship at the independent research organization Arnold Bergstraesser Institute. After his year abroad, he applied to the dual BA/MA German program, which allows undergraduates to complete coursework towards a master’s degree before obtaining their bachelor’s and earned nine credits towards his MA in German Studies. In his time at MSU, he has also participated in several projects with the Graphic Narratives Network working on the digitization of works within the MSU Special Collections. His current academic interests lie in German political identity and expression, as well as graphic narratives and their intersections with the digital. In his free time, Dan enjoys camping, hiking, coffee, skateboarding, and photography. Dan is currently a Max Kade Fellow in a 400-level German course. 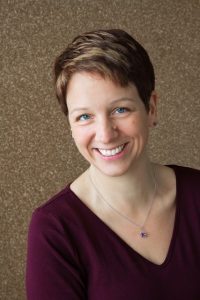 Leonie Hintze completed her teaching degree (Staatsexamen) in Germany and has extensive experience in teaching at the elementary school level and school administration. She is finishing her MA while gaining theoretical and practical experience in teaching German as a foreign language with a special focus in the field of Computer Assisted Language Learning (CALL). Her primary interest is the intersection from Second Language Acquisition and Teaching Methods, with emphasis on task based or project based language learning as an alternative to using textbooks.